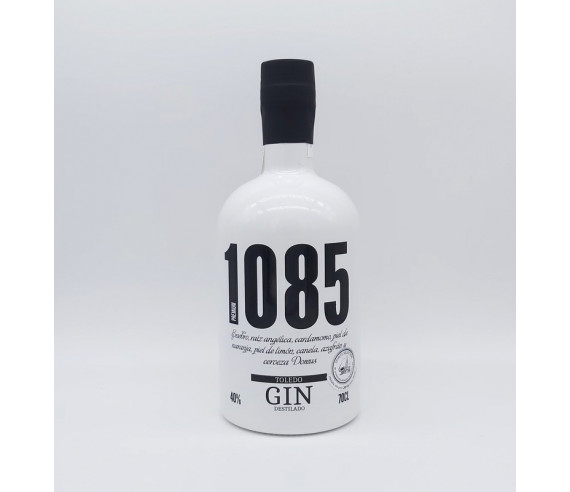 Traditional elaboration made in Spain

Its name, 1085, honors the year that the kingdom of Arab Taifas agrees to join the kingdom of Castile, surrendering king Alfonso VI in exchange for a bull that ensures respect for all citizens regardless of their race, religion or origin.

The 1085 Gin is a Spanish premium Gin and has come with strength to stay.

The London Dry style is made in a traditional way and based on classic botanicals and in addition to the Domus craft beer that gives it a slight touch, it contains juniper, cardamom, orange and lemon peel, cinnamon, saffron and angelica root. Products that give it an authentic national character.

In the manufacturing process, natural ingredients, unaltered barley and juniper fruits are used.

In the first phase of the process, the barley and juniper fruits are macerated in copper stills. Subsequently, a triple distillation of alcohols is carried out with the botanicals that contribute the aromas to our Premium gin

As a result of its careful elaboration 1085 is a gin of 40º, bright, light and soft on the palate, very balanced and with a complex aromatic variety.

On the nose: It starts classic, with juniper and citrus, and a drift to cinnamon and cereal, soft but persistent, thanks to the contribution of Domus craft beer.
On the palate: Clear and notorious juniper, passing to very clear notes of citrus but balanced with the dryness of the root, this contrast is noticeable at the end in which the juniper disappears and remains in the consumer's memory.
Finish: Fresh, bright and aromatic that denotes the openness of the distillate.
Gin 1085 has been awarded a Silver Medal at the Spirits Selection by Concours Mondial de Bruxelles that were held in the city of Tequila (Mexico) in 2016.