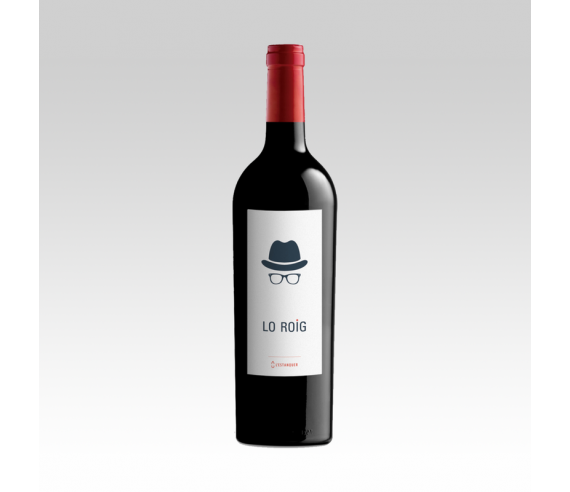 Coupage of Merlot and Syrah grape

The vines are located at about 350 meters of altitude and about 30 km from the Azahar coast, limited to the west by Les Moles de Xert, and to the east by the Sierra de Sant Pere (about 500m in altitude). Further north is the town of Rosell, which orographically borders the Sierra Taialoia belonging to the Tinença de Benifassà Natural Park.

The entire vineyard is located in the municipality of Canet Lo Roig with an extension of 4 hectares. They have three fields: the oldest, La Sort, which is about seventy years old, and the youngest vineyards called Els Regalls and Molló Blanc.

This Mediterranean environment with a mild climate, generally warm and temperate, causes the vines to be influenced by the winds that come in from the sea. Likewise, and due to the height and orography of the area, there is a considerable thermal amplitude between day and night, with rainfall of around 500 ml. year.

Its vines have diverse soils: Els Regalls is characterized by stony and calcareous soils, while in Sort and Molló Blanc we find mixed soils with a greater quantity of clay.

The Vins l'Estanquer winery is located in the historic center of Canet lo Roig, Castellón province, in an old house belonging to the Xiulits family. The house belonged to his great-grandfather and it made wines and spirits. They have restored the space while preserving the character and history between its walls.

They work with about nine grape varieties from different origins, the vast majority are Mediterranean varieties such as Garnacha or Macabeo. They also have varieties such as the white carignan from our old vineyard and other indigenous varieties such as verdiguell or embolicaire. With them they make eight references of different wines; each wine seeks the kindest, and at the same time most complex, expression of the varieties with which they work.

They conceive the wines they make long before picking the grapes; Thus each vine is cared for especially for the intended purpose in the winery. During the harvest they carry out quality controls so that the grapes are picked at the most suitable moment. In addition, they collect the grapes manually in boxes of 20 kg so that it arrives in perfect condition at the winery.

At the winery, the mission is to produce high quality wines using minimal intervention, adding wine products and additives. They also use wild yeasts, each of which expresses the characteristics of the vine from which they come. Furthermore, they work with low levels of sulfur.

The result of this work are markedly Mediterranean wines, with character, structure and salinity. Wines where you will find the flavor of the Maestrat.

At L’Estanquer protecting the environment is a priority and therefore its objective is that its ecological footprint is minimal, thus ensuring that its activity does not have any negative effect on its environment.

It should be noted that for two years we have started the ecological conversion of its vineyards. Thus, we use integrated agricultural production systems with the aim of protecting the soil and biodiversity.

We also donate all the remains of their winemaking, such as the rapa or the skins, to feed cows from a local farm.

Also, they try that all the products used in the finishing of their wines are respectful with the environment. For example, together with another series of measures, they use natural cork stoppers or last generation stoppers made with recycled sugar cane fibers; We use bottles as light as possible for a more responsible use of glass, and recycled cardboard boxes.

If we make all this effort it is because they believe in the conservation of the ecosystem, but also so that a quality product, respectful with the environment and that is a hallmark of the Maestrat, reaches your hands.

Lo Roig is a nod to the origin of the wine and therefore they try to make a wine that represents the terroir well. The grapes are obtained from the estate the Molló Blanc estate, from young vines of about 5 years.

It is a long maceration red wine with its skins. From which it is intended to extract the maximum color and also all the aromas and flavors that the grape can give us. It is then aged in French oak barrels for 12 to 14 months. With the work in the barrel the tannins are polished and the wine is balanced.

The best choice is red meats: grilled, in a hamburger, light stews garnished with herbs such as thyme or rosemary. Game meat, such as duck and rabbit. They also go well with cheeses from gouda hast